The Israeli architecture has received different influences from different styles coming from different culture in the centuries since the Land of Israel has been occupied during its long history. In this way the architecture of Israel is an amalgamate of fortified Crusader castles, Islamic madrassas, Byzantine churches, Templar houses, Bauhaus-style modernist buildings, Arab arches and minarets, Russian Orthodox onion domes, and glass-sided skyscrapers.

The Arab built houses made of stones on the hillsides with flat or dome roofs, the Crusaders built fortresses on hilltops, the Christians built churches, the Templers built homes with tiled roofs taking this style from the German countryside. During the British Mandatory there was a law that required all the Jerusalem constructions to be of Jerusalem stone.

During the first years of the statehood, in Israel a lot of concrete tenements have been built in order to house a large mass of new immigrants. A very famous Israeli architecture worldwide is the Bauhaus architecture that features the Tel Aviv’s White City, which has been declared UNESCO World Heritage Site. In the meantime there was the construction of skyscrapers all around the country, an example is the Moshe Aviv Tower in Ramat Gan, which is the tallest building in Israel.

The most important and leading architects of Israel in the 1950s have been Dov Karmi, Zeev Rechter and Arieh Sharon. Among the most notable architects of the Israel history there were Dora Gad, who designed the interiors of the Knesset, the Israel Museum, the first large hotels of Israel, the Jewish National and University Library, El Al planes and Zim passenger ships, Amnon Niv, who designed Moshe Aviv Tower, the Israel’s tallest building, and David Resnick, who was a Brazilian-born Israeli architect winner of the Israel Prize in architecture and of the Rechter Prize for iconic Jerusalem buildings such as the Israel Goldstein Synagogue and Brigham Young University on Mount Scopus.

The Buildings in the Modern Israel

Until the end of the 19th century, the traditional Arab rural house in the villages consisted of a single room without partitions, divided into three levels, the Rawiyeh, that was a bottom level at the elevation of the courtyard considered the “dirty” part of the house, used for storage and sheltering livestock, the Mastabeh  that was a higher residential level used for sleeping, eating, hospitality and storage and the Sida (gallery) that was another living area above the mastaba, used primarily for sleeping.

The fortified houses were built outside the village core with two structures, such as a raised ground floor with tiny windows used for raising livestock and storage, and a separate residential floor with large windows and balconies. In the courtyard was a small structure used for storage and sometimes it was found a tabun baking oven inside it. The farmhouses was the first modern building of Israel where iron beams were employed together with roofs that was made of concrete and roof tiles, and balconies with a view and wide doorways. Modern housing were built during the British Mandate, with characteristic flat roofs, rectangular doorways and painted floor tiles.

In the neighborhood of Neve Daniel in Tel Aviv there is a particular building that is the Pavie House, a rare example of non geometric biomorphic architecture, blobitecture, in Israel, that can be compared in some opinions, to the futurism of Eero Saarinen’s Trans World Flight Center in New York City. 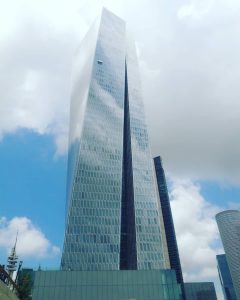 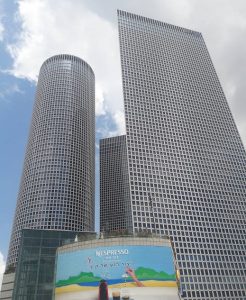 The movie theater architecture is a reflection of Israeli architectural history, since the first cinema, the Eden, that opened in 1914, was an example of the Israeli eclectic style that mixed European and Arab traditions, the Mugrabi cinema, designed in 1930, haw featured by the art deco style, in the 1930s the Esther, Chen and Allenby theaters were the first examples of Bauhaus style. In the 1950s and 1960s the Brutalist style architecture appears with the building of the Tamar cinema inside the Solel Boneh building in Allenby Street, featured by the use of bricks and concrete ruggedly combined together.

The Contemporary Architecture in Israel

From the 1948 the architecture of Israel has been characterized by the popular concrete houses in view of the large coming of new immigrants, and in this period the Brutalist concrete style dominate the cities of Israel as the synthesis of the harsh climate with the paucity of natural building materials. In Jerusalem municipal laws imposes that all the buildings have to be faced with the local Jerusalem stone.

Traveling through Israel the design influences and the differences among cities and towns are very tangible, since each city from Jerusalem to the coast and up to the north to Caesarea and Akko, there is a fusion of older and newer European styles, the Romanesque to the Gothic, the Byzantine to the Crusades, the later Ottoman period, along with local Arab styles and the more modern designs of the Jewish pioneers of Second Aliyah period. Nowadays Israel is a fusion of global styles, such as the skyscrapers of the East with the towers of New York City, in particular in Tel Aviv where architects such as Phillipe Starck and Richard Meier give their unique stamp on this unique city that continues to grow up with towers.

The Krayot neighbourhood in the city of Haifa