This blog post illustrates the most famous Jewish holiday food in Israel and abroad. For each holiday, Jews have a different menu that changes also depending on the Jewish ethnic group. Jewish festivals, dating back to ancient times, are still celebrated passionately in Israel. There are religious and traditional customs that conditions and landmarks in Israelis’ lives for each Jewish festival. They bring intrinsic values to daily life in Israel. Everywhere in Israel, from the streets to the Synagogues and homes, people embrace the Jewish holidays’ essence.

On Friday night and Saturday, Jews celebrate the Shabbat holiday, during which it is forbidden to cook; hence, it is customary to prepare a big meal on Thursday and Friday morning. Shabbat is a way for families and friends to reunite and enjoy meals together. It is popular to serve fish and challah bread as starters and several salads and sauces. Hereafter, chicken soup, vegetables, kugels and meat dishes are the main dishes. The meals finish with desserts and fruits.

The Ashkenazi cholent is the most popular meat Shabbat recipe, and it consists of beef, potatoes, barley, beans, and kishke, with pepper and paprika. Sephardi hamin consists of chicken or beef, rice, beans, garlic, sweet or regular potatoes, turmeric and cinnamon, with the addition of whole eggs, in Hebrew haminados. Moroccan dafina or skhina consists of meat, onion, marrow bones, potatoes, chickpeas, wheat berries, eggs and turmeric, cumin, paprika and pepper. Iraqi Jews usually prepare the tebit with chicken and rice.

The desserts are usually homemade or come from bakeries, and the usual cakes are sponge and chocolate cakes, citrus semolina cake, cinnamon or chocolate babkas, fruit and nut cakes.

The New Jewish Year is Rosh Hashanah. It is a festival whose celebration happens with the preparation of big family meals and serving as a starter a honey dip with apples and finishing the meal with a honey cake. Unlikely Shabbat, the challah is round and sometimes sprinkled with raisins and always dipped in honey. The usual appetisers of Rosh Hashanah are pomegranates, carrots, leeks and beets. As in the case of Shabbat, in the Jewish New Year, fish is served as the first course; in the Jewish tradition, it always comes before meat dishes.

Ashkenazim typical fish is gefilte fish, which is groundfish such as carp, whitefish, pike, mullet, Nile perch with eggs, onions, bread or matza crumbs, spices, salt, carrots and potatoes and it is boiled in fish stock. Sephardim use to prepare the chraime, a very spicy dish consisting of fish such as mullet with garlic, onions, hot and sweet paprika, cumin, tomato paste, jalapeno, crushed red pepper flakes and salt.

Pomegranate dishes are diffuse in the Rosh Hashanah menu, and the typical dessert is the lekach, a dense honey cake. There are variations of lekach as a sponge or pound cake, and other variants are gingerbread, pain d’épices, or lebkuchen.

In Hannukah, it is a universal Jewish custom to prepare fried food such as latkes and sufganiyot. Latkes are fried potatoes pancakes coming from Ashkenazi culture; sometimes, latkes consist also of zucchini and cheese besides potatoes. The potatoes can be grated or smashed depending on the family custom. Nowadays there are also versions with carrots and onions. Sufganiyot are round jelly doughnuts, and they are usually deep-fried and filled with jam or custard. Nowadays, besides the sufganiyot filled with strawberry jam, there are the ones with cream, chocolate, coffee, and cappuccino fillings; moreover, they are coated with powdered sugar and cream and other decorations.

Tu Bishvat is the New Year of The Trees, and it is customary to plant a tree and eat fruit, dried fruit and nuts such as figs, almonds, dates, raisins and carobs. A Tu BiShvat seder occurs among religious and not Jewish families, whose meal consists mainly of the Seven Species of Israel: wheat, barley, grapes, figs, pomegranates, olives, and dates.
The fruit and nuts are divided into three groups that correspond to different spiritual levels; from lower to upper Kabbalistic level, there are:

The fruits with a shell symbolise the most materialistic dimension of reality, and the fruits without inedible peels represent the most hidden and secret dimension.

Purim is one of the most important Jewish festivals. It celebrates the salvation and freedom of the Jewish Nation from the evil plot of Hamman to annihilate all the Jews during the ancient Persian Achaemenid Empire. The Book of Esther is one of the most essential Hebrew Bible books, i.e. the Jewish Tanakh. Hence, it is a day of grand celebration during which adults and children dress up wearing fancy or funny costumes, and in the synagogues, the Megillah of Esther, i.e. the Book of Esther, is read out loud.

It is also a tradition to organise a festive meal, i.e. seudat Purim, among families and friends. Wine and oznei Haman, i.e. Haman’s ears, never go missing at the tables. The oznei Haman are three-cornered pastries with different sweet fillings. The most popular stuffings are poppy seeds, prunes and apricot jam; additional garnishes are apricot, prune, strawberry, raspberry, chocolate, peanut butter and jelly. Moreover, as a final touch, oznei Haman topping consists of sprinkles or powdered sugar. The triangular shape might come from the three-cornered hat that Hamman wear in old illustrations.

It is a tradition and custom to donate Mishloach Manot, which are Purim baskets containing gifts such as food and drinks packages to neighbours, colleagues, friends, and family members. This custom comes from the Book of Esther, and it is a symbolic way to ensure that everyone has something to eat and drink to share the joy of the miracle of Purim. It is also a way to create and maintain connections inside the Jewish Nation because what always saved Jews from annihilation has been unity.

Passover or Pesach is one of the most fundamental festivals of the Jewish Nation. It commemorates the Exodus of the Jews from Egypt after 210 years of slavery. On the first night of Passover, the big meal, i.e. seder Pesach is unique and particular. It is customary to organise it among families and friends, and the most crucial thing during Passover is to never eat chametz, which is food with leavening agents. Hence, bread, pastries, and fermented drinks such as beer are banned. Additionally, Ashkenazim don’t consume kitniyot, i.e. legumes and grains such as rice, corn, sunflower seeds, and sesame seeds. The most common Passover recipes are matzot, chicken soup with matza balls, i.e. kneidlach, spring veggies such as asparagus and artichokes, and of course potatoes and gnocchi. 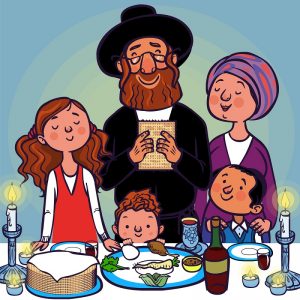 It is a tradition to start the Passover seder with a precise sequence of fourteen actions:

Silverware is commonly used at the table settings, and the attendees are usually dressed fancy as in the Jewish custom regarding all the holidays, including Shabbat. It is also a tradition to invite known and unknown guests to the meals and needy people.

The ke’are is the special Passover plate, which is divided into six sections. Indeed, each of the six food symbologies different traits of the Jewish Pesach, which are:

After Passover, among the North African Jews, there is the tradition of the Mimouna. It is customary to prepare a mix of flour, honey, milk, and butter. And a famous Mimouna dish is the Mofletta, a Maghrebi Jewish traditional pancake with a honey or jam garnish. Moreover, there are many outdoor gatherings with barbeques and picnics, where the main meal is salads, barbecued meat, and regular bread.

In the summer, Jews celebrate the harvest festival of Shavuot, on the occasion of the new grain harvest, mainly wheat, the ripening of the first fruits, and it is the period of milk abundancy. Hence, this holiday’s primary food are dairies, such as cheeses, yoghurts, cheese-based pies, quiches or pashtidot, cheese blintzes, and cheesecakes. In old times, the grain harvest endured seven weeks, and it was also the season of gladness. In the beginning, there was the barley’s harvesting during Passover, and it ended with the reaping of the wheat at Shavuot.

Celebrations and festive atmosphere are part of the Jewish world. In particular, in Israel, the Jewish festival’s spirit becomes more intense and felt by all Israelis. Food is an essential part of the celebration of each festival.

This website uses cookies to improve your experience while you navigate through the website. Out of these, the cookies that are categorized as necessary are stored on your browser as they are essential for the working of basic functionalities of the website. We also use third-party cookies that help us analyze and understand how you use this website. These cookies will be stored in your browser only with your consent. You also have the option to opt-out of these cookies. But opting out of some of these cookies may affect your browsing experience.
Necessary Always Enabled

Any cookies that may not be particularly necessary for the website to function and is used specifically to collect user personal data via analytics, ads, other embedded contents are termed as non-necessary cookies. It is mandatory to procure user consent prior to running these cookies on your website.